Saudi Cities: The Key to Our Future Economy

Cities are considered engines of economic growth, accounting for 70 percent of global GDP. As the world has entered the era of globalization, in which states compete on economic and strategic grounds, states have increasingly come to view the role of urban economies as crucial in realizing wider agendas for sustainable economic development. Besides providing a social and physical environment for their residents, cities contribute to a larger agenda of achieving economic prosperity and making significant contributions to the national GDP.

Realizing the economic importance of cities, several regional and local governments worldwide have set out plans to transform their cities into more productive and competitive urban centers by offering a client-service environment, attracting large-scale investments and promoting business activities.

Many cities, in turn, have harnessed their growth prospects and become the global landmarks of economic success. The best examples are the cities of Tokyo, New York, Osaka-Kyoto-Kobe, Los Angeles, Nagoya, Chicago, London, Greater Antwerp, Greater Bonn and Washington DC – which together host just 2.6 percent of the global population yet account for more than 20 percent of global economic activities.

As part of this trend, several natural resource-based economies have redefined their conventional policies and embarked on bringing diversity to their economic bases. Saudi Arabia is no longer an exception. The country has recently unveiled its ambitious national Vision 2030, aimed at achieving diversification of its oil-based economy over the medium- to long-term period.

Among its multiple objectives, the new Vision 2030 aims to expand local businesses and global investments in the Kingdom by 2030. Some highlighted objectives of the new vision are to:

But what economic levers can be used to inaugurate this new phase of the Saudi economy?

Like in other OPEC countries, the fast-track infrastructure development across Saudi Arabia has resulted from its oil-driven economic boom over the past few decades. This has led to rigorous growth and expansion of its major urban centers. This phenomenon is equally evident from the nearly fourfold growth in its urban population since 1950, i.e. from 21.3 percent of the population to 83.1 percent today, which has positioned Saudi Arabia among the world’s largest urbanized economies featuring more than 80 percent urban agglomerations.

A few big cities, including Riyadh, Jeddah, Dammam and Makkah, host a substantial proportion of the Kingdom’s population (both citizens and expats). They yield a significant share of the Kingdom’s GDP and feature large markets for goods and services. According to the Oxford Economics “Global Cities 2030” report, which forecasts trends and market opportunities in the world’s 750 largest cities, Riyadh and Jeddah rank 19 and 47, respectively, among the top 50 cities anticipated to see the highest increase in population and GDP.

The above figures indicate an increasingly dominant role for urban centers in Saudi Arabia’s new economic age – hence the need to harness their economic potential by creating an environment conducive to successful growth and expansion of new markets, businesses and investments.

According to a World Bank study entitled “Competitive Cities: A Local Solution to a Global Lack of Growth and Jobs”, competitive cities foster three sources of growth: the creation of new firms, expansion of existing firms, and attractiveness to investors. Therefore, in the context of achieving the state’s overarching goals of economic diversification, Saudi cities would require interventions along the lines of regulations, infrastructure, and enterprise support, in order to create a business-friendly climate that suits the needs of firms.

Notably, achieving economic diversification through capitalizing on urban economies is not an unprecedented phenomenon. The world has witnessed such examples in the past.

Fifteen years ago Oklahoma City relied upon the oil and gas industry for a quarter of its state revenue generation. Today that reliance has been reduced by half as result of concerted efforts towards economic diversification, ranging from incentivization programs for business promotion to innovation in manufacturing and advancements in engineering fields. The city offers good employment prospects for engineers, and has been recognized under the “New Geography” study as number three among its “Best Cities for Engineers” list.

Santiago de Chile, one of the fastest-growing cities in Latin America, has established itself among the most competitive cities in the region. The city introduced a regional innovation strategy in 2012, under which significant investments were made to stimulate innovation across multiple sectors by promoting the research and development sector.

Curitiba, Brazil, also engaged in similar efforts to develop local capacities and achieved a high-quality urban environment by introducing innovative solutions in public transportation, urban growth management, and environmental preservation. In 2010, Curitiba ranked 10th among cities in the UNDP human development Index. In fields of innovation and research, many universities have partnered with international firms to advance important technology areas that helped the city to contribute 1.43 percent of Brazil’s GDP in 2010.

The above examples showcase how economic transformation goals can be achieved by capitalizing on urban sectors. This strategy improves a state’s overall diversification by increasing the range of economic outputs and innovation that takes place within favorable urban environments.

Achieving competitiveness in Saudi cities would require collaborative efforts at regional and local scales. At the regional level, new growth and development strategies can support the channeling of investments across the region. In this context, comprehensive studies should examine local economics and infrastructure demands in urban areas.

Today, the world recognizes the role of cities beyond simply acting as containers for people: in the global economy cities function as a main driver of growth that can be achieved through building economies of scale, facilitating businesses growth, fostering innovation, and providing efficient infrastructure.

Saudi Arabia has recently set out its path for achieving economic diversification. As witnessed in other economies, transforming Saudi cities into highly productive engines of the economy will be a game-changer for the Kingdom’s new phase of the economy. 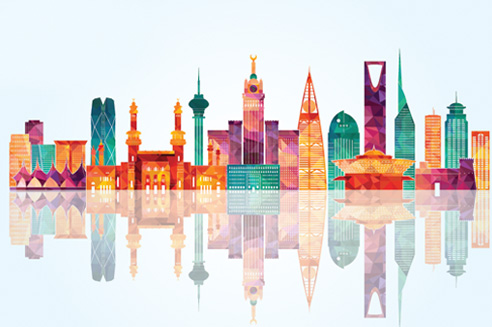 Saudi Cities: The Key to Our Future Economy